One member of our family has consistently warned the other about the risk from zakkenrollers, i.e., pickpockets. Amsterdam has a reputation for an active community of them. One can effectively guard against them, largely because others become the low-hanging fruit. In an ironic twist, the one who consistently gave the warnings, rather than the one who consistently pooh-poohed them, was picked.  The thief took keys and wallet, which had been attached to each other.

Tram #5 is like the green line in Boston: it can be very crowded.  It was the scene of the crime, somewhere between Spui and Leidseplein.

Our appropriately distraught crime victim called the police, but could not navigate the Dutch auto attendant (this was not the emergency number, where they are multilingual).  So he or she visited the police department the following morning, where the office said, in essence, why bother with a report?  They did not even want to count the crime. (They apparently discounted the possibility that the items might be recovered and the police might need to call the victim with the happy news.) 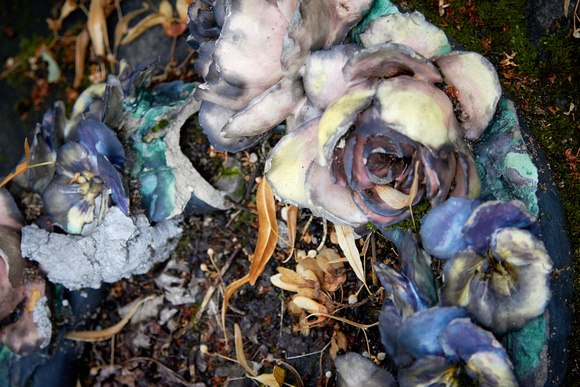 After starting all the steps to recover from loss of keys and wallet, a miracle occurred.  The police called and said that they had the stolen items, but the money had been removed from the wallet. It turns out the someone found them on the ground in Leidseplein and turned them in to the police. The police already had the relevant phone number because that person was a witness to an accident and gave a statement to the police then.

So we have now witnessed two crimes in five months; a drunk driver hit a cyclist, and a pickpocket picked a pocket.  The photo?  It shows urban detritus and is here to stand in for crime and its effects.

I was interviewed about a week ago in Spui, where we had just visite a bookstore. The interviewer was asking about crime in that neighborhood, whether I liked having surveillance camera, whether I wanted more police. I professed not to be worried at all about crime, and I still have no idea how much crime there is in Amsterdam.  Maybe I should look into that.