Every time I take Izzy for a walk to Museumplein, I worry about her getting seriously injured.  To cross Van Baerlestraat, one must cross a bike lane, then a car and bus lane, then two tram lanes, then another car and bus lane, then a bike lane. On bike lane 1, vehicles are supposed to come from the left only, but sometimes they come from the right. Sometimes cars travel in the tram lane.  Bikes and scooters, which can travel 20 to 25 mph, are supposed to be in the bike lane, but sometimes they come onto the sidewalk, to park or to pass slower vehicles in the bike lane. We always cross at the cross walk, but frequently bikes, scooter, and cars do not stop or slow down for pedestrians, and cars sometimes stop and sometimes not.  If you just forget once for a moment, Izzy might stray into the path of a vehicle.  And I have forgotten a few times, but fortunately nothing bad happened. 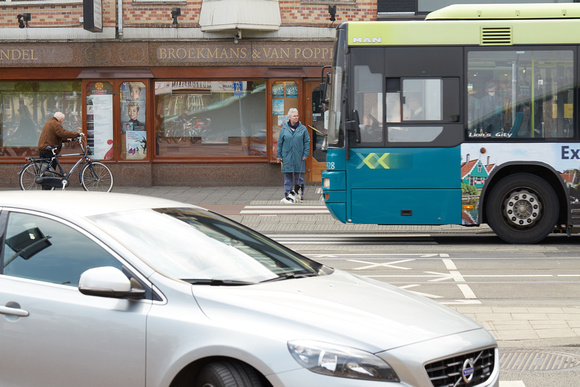 If there is one aspect of Amsterdam that I do not like, it is this congestion and mixing of vehicles this way. Safety depends on the participants in the system being careful and following the rules, so there are bound to be accidents.

There is a short street between our house and Van Baerlestraat alongside the Concertgebouw.  Part of it is closed to traffic, but last week a car drove right onto the closed part and collided with a biker. The biker was an older man. He was knocked off and suffered cuts and bruises at least.  He was obviously in pain.  The driver was obviously intoxicated.

Several people stopped and helped him. Security guards emerged from the Concertgebouw and called the police and the ambulance and brought some towels to cushion the man's head and arm (he was lying in the street).  I am surprised that we have not seen more accidents.